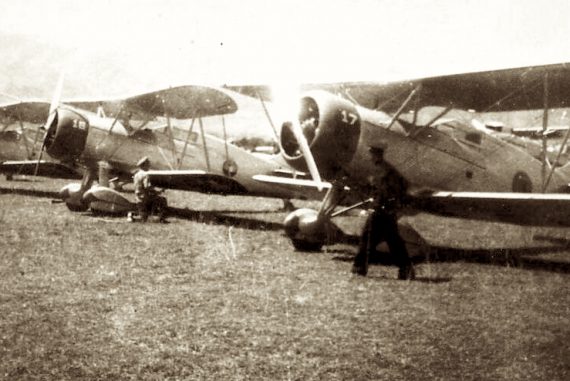 The Waco company was founded in 1920 as the Weaver Aircraft Company in Lorain, Ohio. The company always sold its products under the Waco nameplate (Weaver Aircraft Company = Waco) and, after being known briefly as the Advance Aircraft Company, changed its name to Waco Aircraft Company to officially reflect the trademark. The company had moved its corporate headquarters to Troy, Ohio in 1923. By 1940, Waco had established itself as one of the premier manufacturers of civil light aircraft in the world, with a diverse catalog of models and thousands of sales. Their products also developed a reputation for luxury and reliability. Later, during the Second World War, Waco would be famous as designers and manufacturers of military assault gliders (they designed ALL the U.S. assault gliders that reached series production before 1945 – the CG-3, CG-4 Hadrian / Haig, the CG-13 and the CG-15). However, Waco never successfully made the transition back to the peacetime economy, and stopped all production in 1947.

In the meantime, prior to World War II, Waco made a few attempts to break into the lucrative military market. They sold two Model UBFs to the US Navy, which designated them XJW-1; these were modified as specialized trainers for hook-on landings on airship trapezes. One of Waco’s largest customers though, was Brazil, to which country they sold 20 RNF trainers in 1932, and 44 CPF trainers (34 to the Exército [Army], and 10 to the Marinha [Navy]) in 1935: the last of these served until 1947. Brazil also purchased 32 CJC and 30 EGC-7 light transports for use in the Exército- and Marinha-run air mail programs. At home in the U.S., Waco lost out to Boeing-Stearman on what turned out to be a huge basic trainer market with their UPF-7 (military designation PT-14), but did manage to sell nearly 600, mostly on the civil market, many of which were used for paramilitary training by the Civilian Pilot Training Program (CPTP). Small numbers of closely related trainer models were sold to Guatemala (4 UMF-3s and 6 VPF-7s), Cuba (3 UMF-3s) and Venezuela (3 UPF-7s).

Waco did make some attempt to develop and sell more militant aircraft, especially targeting Latin American air forces in their marketing.  “Fighter” versions of Waco’s CSO had been used in the early 1930s in Brazil’s civil war, but these were simply armed versions of their normal sport airplanes.  In fact, the effort to arm these aircraft was in vain, as the armament never functioned properly, and most CSOs ended up being used as training, liaison or reconnaissance aircraft.

The six Guatemalan VPF-7s could be configured as light fighters, with a canvas covering over the forward cockpit and machine guns installed.  The most famous use of the VPF-7s, however, was the 1939 Goodwill Flight to El Salvador, Nicaragua, Costa Rica, Panama, and the Canal Zone.  This flight of 1,886 total miles took place between 5 and 14 February 1939, and included five of the Wacos in two-seat configuration, as well as five Ryan STAs in single-seat form.  The flight went off “without a hitch,” and was a proud moment for the Guatemalan Cuerpo de Aeronáutica Militar (Military Aviation Corps.)

Certainly the most potent of Waco’s “warplanes” was the two-seat, general purpose Model D.  Introduced in 1936, the Model D was offered in six different variants.  The CHD and SHD were to be dedicated trainer aircraft, powered by low-powered Wright or Pratt & Whitney engines, respectively.  No CHDs or SHDs were sold, as Waco’s customers desired more powerful, combat-capable versions.  The other variants were all armed with fixed and flexible machine guns as well as bomb racks, and differed primarily in engine choice.

The most successful version of the Model D (in terms of sales) was the JHD.  A total of ten JHDs were sold to Uruguay’s Aeronáutica Militar (Military Aeronautics) in 1937 and served with that air arm until at least 1945.  The JHD was powered by a 365-horsepower Wright R-975-E1 Whirlwind nine-cylinder radial housed in a smooth NACA cowling.  It was equipped with a .30-calibre Browning machine gun in the lower right wing with 1000 rounds of ammunition, and a similar gun on a flexible mount in the rear cockpit, with 500 rounds of ammunition.  The JHD carried two U.S. Army Air Corps A-3 bomb racks, each capable of carrying either five 25-pound bombs or two 125-pound bombs, though in practice, only one rack could be loaded if 125-pound bombs were carried.  Top speed for the 3800-pound aircraft was 170 mph at sea level, and service ceiling was 15,500’.  The price of the JHD was a bargain basement US$16,650 each.

Somewhat more powerful was the WHD model, with a 450-horsepower Wright R-975-E3.  Armament was identical to the JHD, and performance improved only slightly, with a top speed of 175 mph, and a service ceiling of 18,000’.  The appearances of the JHD and WHD were almost identical as well; the distinguishing characteristics being limited to a dorsal airscoop just aft of the NACA cowling on the WHD, while the JHD had no scoop, but cooling louvers on the fuselage sides aft of the cowling.  The WHD was sold in small numbers (either three or four, depending upon which reference you believe) to Nicaragua, where they saw Fuerza Aérea de la Guardia Nacional (National Guard’s Air Force) service from 1938 until 1950.  WHDs sold for US$17,540 each in 1938.

The most expensive of the Waco Ds was the S2HD at US$18,305. This was powered by the Pratt & Whitney Model SB Wasp Junior rated at 450-horsepower. Weights and performance were identical to the WHD, and armament was the same as the JHD and WHD. Visually, the S2HD differed dramatically in having a “fluted” cowling, with the characteristic bumps over each cylinder head. At least one S2HD served the Cuerpo Aéreo  – Ejército de Cuba (Air Corps – Cuban Army) from 1937 until about 1947. The S3HD was sold as a civil model, but may also have served with the Cuban air arm. The total of all S2HD/S3HDs serving the Cuban air arm was apparently as many as four, but reliable references are few and far between. An A-prefix is sometimes used to identify an armed Model D, and this is most commonly used to refer to an armed S3HD (S3HD-A), as there WAS an unarmed S3HD, while all other models only ever appeared in their armed versions.

As far as can be determined, Waco’s Model Ds were never called upon in actual combat (although some may have been used to patrol for Axis submarines during World War II). Their relatively long service is a testament to the famed Waco quality and durability. Given the historical events occurring during their service lives, perhaps the best that can be said for the Wacos is that they were not a failure, and they gave good value for their money. The large numbers of more capable combat aircraft that became available toward the end of the Second World War at near-giveaway prices ensured that the Wacos would be eclipsed in service soon after 1945. Nevertheless, the Model Ds are a visually pleasing and interesting memory for today’s aviation historians.