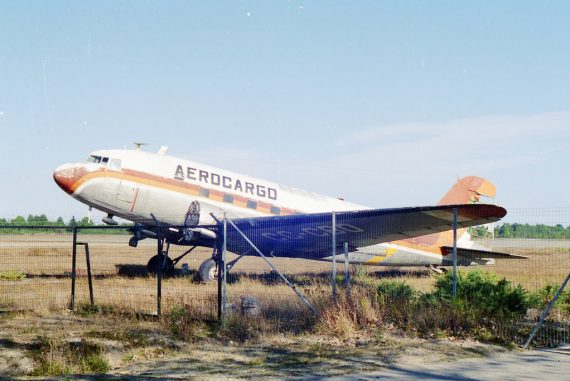 At El Tepual Airport, in Puerto Montt, Chile, there is a long-time abandoned DC-3C; it is a significatively complete airframe that is under care of the airport’s Servicio de Salvamento y Extinción de Incendios -SEI- (fire rescue service.) This aircraft has spent more that 50 years in Chile. Originally, she was a C-47 built for  the USAAF as 41-38731 (C/N 6190), and after WWII, she was registered in the U.S. as NC61518 (later N61518). In 1951, she was exported to Chile where she gained the civilian registration CC-CAL/0356 on May 5, 1951, while being operated by the Empresa Nacional del Petróleo (National Oil Company) the on behalf of LAN-Chile airline.

Later on, she was sold to LAN-Chile and the airline registered her as CC-CLDI/241 on October 9, 1962. However, due to the general rearrangement of LAN-Chile’s registration system, which implied the use of four-letter registrations, the airplane was re-registered as CC-CBO on December 13, 1962. Then, less than twelve years later, on July 31, 1974, she was sold to a Coyhaique-based airline named Empresa Aérea Aerocor Ltda., also known as Aerolíneas Cordillera,  keeping the same registration.

Under the ownership of Aerocor, CC-CBO was involved in an incident that took place on May 15, 1979,  during a training flight near the Teniente Vidal airfield, in Coyhaique. In that occasion, the airplane made a forced landing on a plowed field located 800 mts from the airport after running out of fuel; the relatively soft surface of the plowed field  helped to stop the airplane during landing. However, during the landing roll, the DC-3 made a nose-over and sustained damage in the nose cone, the nose section and in one of the blades of the starboard propeller. Fortunately, the airplane ended up resting on its three wheels. The DC-3 was later moved to the airfield for repairs, returning to service a couple days afterwards.

In the mid-eighties, the airplane was acquired by Carlos Griffin, owner of Línea Aérea Taxpa Ltda., which began operating the DC-3 under a contract signed with Griffin on August 8, 1984. However, due to problems with that contract –which was not in force-, it was re-registered as CC-PQF on May 9, 1991. Then, within weeks, she was sold by Griffin and on November 4, 1991, she was re-registered as CC-CBO, this time by a Puerto Montt-based company named AeroCargo Regional Ltda., which owned several DC-3s with which it provided freight services.

CC-CBO flew for the last time in 1996, being –literally- abandoned at El Tepual. After the demise of AeroCargo Regional, the airplane’s registration was cancelled by the Civilian Aeronautics Directorate -DGAC- on April 21, 1999. By then, all those items that could still be useful (propellers, engines, etc) had been removed from the airplane, and all fabric-covered surfaces began to rot.

In 2003 it was finally taken over by El Tepual’s SEI, and since then it has been used on non-destructive fire rescue training; the aircraft has been painted in the SEI’s colours and insignia, while its members, conscious of the history of this WWII aircraft, are currently looking to recover the fabric-covered surfaces, as they are committed in preserving this aircraft in the most complete status possible.

The author wishes to thank Mr. Mauricio Thomas, Chief of Airports and Airfields of Chile’s X Region and Mr. Roberto Lorca, Chief of El Tepual Airport SEI, and all the members of the Servicio.