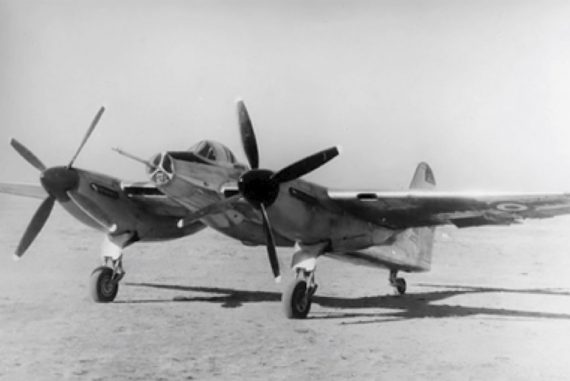 History is not a set of isolated facts. In contrast, historical events happen like a chain effect that join many successes and failures. Aeronautical history in particular, is full of very interesting facts which have united the fates of several actors and, sometimes, even countries.  A good example of this could be Argentina, a nation that right after WWII became an aviation technology pioneer in Latin America, mostly due to the presence of german and italian engineers who came up with an impressive array of advanced aircraft designs, including combat airplanes, transports and even jet fighters, which were produced locally with varying degrees of success. One of these avant-garde designs was the I.Ae.30 Ñamcú (little hawk), a twin-engine fighter that broke many records which, still today, remain unbeatable for aircraft of its class. More interesting though, is the fact that the airplane was tested successfully at high altitude while attending a demonstration in -of all places- La Paz, Bolivia!

The Ñamcú was a design of the Italian aeronautical engineer Cesare Pallavicino, who arrived in Argentina in 1946 to work for the Instituto Aerotécnico de Argentina (Aerotechnical Institute of Argentina.) Previously, Pallavicino had worked for the renowned Caproni company. Regarding the airplane, Pallavicino conceived it as high-speed fighter-escort that could provide protection for the Avro Lancaster and Lincoln bombers that the argentine government had just acquired from the United Kingdom.

The airplane’s projected armament consisted of six Hispano Suiza 20mm cannons, a 250kg bomb that could be carried under the fuselage, and ten 83mm rockets hanging from five launchers under each wing. However, the first prototype that the Instituto Aerotécnico built didn’t have any weapons installed.

The Ñamcú’s first flight took place on July 17, 1948, at the command of the test pilot Edmundo Osvaldo Weiss. The next day, the airplane broke the speed record for airplanes powered by piston engines when it reached an average speed 648 km/h at an altitude of 18,000 ft, during a flight between Córdoba and Buenos Aires that lasted 55 minutes, a real milestone for the time.

On August 8, the I.Ae.30, together with the I.Ae.27 Pulqui I jet, were presented in Buenos Aires before the President of the nation, Juan Domingo Perón, who on that occasion decorated Pallavicino for his contribution to technological development of Argentina.

Shortly after the flight testing was completed, the Instituto Aerotécnico began preparations for taking the I.Ae.30 to the international aeronautical fair of Farnborough, in England, which would take place in September of 1948. The project involved flying the Ñamcú all the way to Europe and for that reason, they came up with an auxiliary tank for increasing the airplane’s range to 4,827 km. Sadly, the project was canceled due to the high costs involved, thus losing the chance for the Ñamcú to face what the Argentine engineers considered its rival: The de Havilland DH.103 Hornet.

In October 1948, the neighboring country of Bolivia was celebrating the 400th anniversary of the La Paz city’s foundation, and one of the events to commemorate the historical milestone was an international industrial fair (Feria Exposición Industrial Internacional) to which several countries were invited, including Argentina, Chile, Peru, the United States and Switzerland. In the particular case of the argentine delegation, it was made of a large number of exhibitors that occupied a whole pavilion and, at the inauguration, President Perón himself addressed the attendees with allusive words, although through a telephone call. The delegation also included representatives of the Instituto Aerotécnico, who had brought along the Ñamcú prototype. The idea was not only to present the airplane to possible buyers, but also to test its performance at high altitudes, since La Paz sits at an elevation of 11,942 ft above sea level. The Instituto’s technicians were so confident on the design that they were expecting the airplane to reach speeds similar to jet fighters!

The high-altitude test flight, which would be also a public demonstration of the airplane’s performance, was scheduled for the morning of November 4, at the El Alto airfield, which sits at an elevation of 13,123 ft above sea level. Besides monitoring the engines during the start and while taxiing, the pilot and the technicians would focus on the following:

Some of these maneuvers, specially the ones to be made at a high rate of speed, would be repeated a couple of times by Weiss, who was the test pilot for the occasion, in order to give the attendees the chance to appreciate them more easily. According to the local newspapers, those maneuvers would “require special attention from the spectators.”

On that day, the Ñamcú took off at 11 o’clock and the pilot followed the pre-established flight plan to the letter. However, when it was completed, Weiss decided to drop a couple of additional maneuvers that included a low pass with the landing gear extended and another with a feathered engine. During the final climb, after a low pass at high speed, the airplane was momentarily lost in the clouds over the airfield, only to reappear in a rather aggressive dive aimed directly to the stage where the attendees watched in amazement. Masterfully, Weiss recovered the airplane only a few meters from the ground. During that dive, Weiss managed to break the speed record for twin piston engine aircraft once again, as the Ñamcú reached about 885 km/h. A couple of minutes later, the Ñamcú landed gently on the runway and parked near the stage, while the audience acclaimed the daring pilot. The Bolivian officials didn’t lose any time and asked Weiss to address the public. The pilot, on his part, took the opportunity to highlight the progress of the Argentine aeronautical industry as well as the friendship between the two republics.

Upon the airplane’s return to Argentina, and thanks to the tests carried out in La Paz, the Ñamcú prototype received a series of modifications that included the installation of compensators in the ailerons and rudder as well as other minor modifications on the flight controls. The nose cone, made of a one-piece plexiglass, was replaced with one made of three pieces, with the one at the front being armored. By then, the plans of the Argentine government was to acquire at least 210 airplanes of the “improved” variant.

After resuming the test flights in April 1949, and following the advice of Edmundo Weiss and the german engineer Kurt Tank, additional modifications were made to the second prototype, which at the time was still incomplete. Such modifications included a new tail unit with the horizontal stabilizers placed in a lower position, a new rudder made of a single piece instead of two, a solid nose that would allow the installation of the 20 mm cannons and the replacement of the canopy in order to improve the pilot’s visibility. Sadly, this second prototype was never completed.

The first prototype of the I.Ae.30 continued flight evaluations until late 1949. It was expected to join the active service sometime in March 1952. However, in February, the airplane sustained heavy damage while landing, as it cartwheeled as soon as it touched the runway. The pilot, Captain Carlos Bergaglio, was able to walk away with minor injuries, but the airplane was declared a total loss even though it could have been repaired. By then, the interest on the Ñamcú concept had waned down, and all eyes were set in the development of the I.Ae.33 Pulqui II jet. Around the world, the development of piston aircraft as combat aircraft had come to an end.

Later on, the Ñamcú project was revisited by the Instituto technicians, albeit very briefly. It happened when Argentina obtained the license for the construction of the Rolls Royce Derwent jet engines. The plan was to install a pair of those powerful turbines on a new variant of the Ñamcú. However, that project was also cancelled within months.

Born in an era when it was already obsolete, the Ñamcú broke records that remain unbeaten today and proved to be at the same level of contemporary jets. In fact, the little plane that could, exceeded the expectations of those who designed it.