The Caproni Ca.114 in Peruvian Service 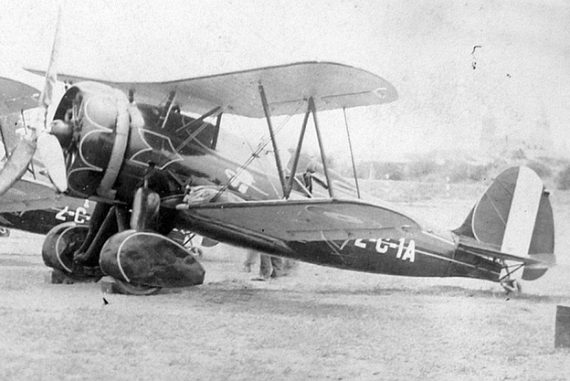 The frantic rearming process that followed the cease of fire of May, 1933, which put to an end the hostilities between Perú and neighboring Colombia, caused the arrival of some of the most exotic types to serve in Perú and Latin America. Given the numerical superiority gained by the Colombian Military Aviation at the end of the conflict due to the purchase of thirty Curtiss model 35A Hawk II fighters, the then Peruvian Air Corps, ordered its Technical Purchase Commission to seek for high performance fighters capable to outperform the nimble Hawk, both in float and conventional landing gear configuration.

Meanwhile in Italy, the Caproni Ca.114 biplane fighter and the soon-to-be famous Fiat Cr.32 were being evaluated as part of the 1933 Regia Aeronautica’s fighter competition. During these tests, the Caproni biplane proved to be superior to the FIAT design in climb, maneuverability and ease of maintenance, being beat by the FIAT design only in horizontal speed. The Regia Aeronautica, however, declared the FIAT product as the winner, alleging the use of an indigenous powerplant (the Caproni used a license built copy of the Bristol Mercury engine, the 550hp Isotta Fraschini “Mercurio” nine cylinder engine.)

The Italian government, willing to allow Societá Aeroplani Caproni S.p.A. to cover their development costs for the type, allowed the company to offer, through its Consorcio Italiano di Esportazione Aeronautiche, the Ca.114 to the foreign market. Along the Caproni fighter, the Italians also offered the FIAT Cr.30 fighter, which after evaluation was rejected by the Peruvians due to its comparatively high price and its engine, which the commission considered as “troublesome.” Shortly after receiving the committee’s evaluation report, the Peruvian Navy and Aviation Ministry issued an order for twelve machines to be delivered under specific terms, which included the recalibration of the machine guns, the capability to operate with both conventional and float equipped landing gear, and the assurance of a quick delivery.

Caproni complied with all the requirements established by the Peruvians, delivering the aircraft in December 1934. The twelve machines were loaded aboard steamer SS Mameli and shipped to El Callao, where they arrived in early January 1935, and were shortly after assembled at “Las Palmas” airbase, in Lima, by Caproni personnel sent along with the airframes. As the fears of a protracted conflict with Colombia failed to materialize due to the peace agreement signed in Rio de Janeiro on May 24, 1934, the subsequent demilitarization of the area made unnecessary the deployment of the fighters to the Amazon River. Consequently, the Ca.114 were never fitted with the floats they arrived with and, instead, nine of them were assigned to the newly activated First Aviation Squadron as part of the Second Fighter Squadron, unit assigned to the First Aviation Squadron based at the soon-to-be finished “Teniente Coronel Ruiz” airbase in Chiclayo. In the meantime, the unit held an intensive training cycle at Las Palmas, where the aircraft received new serials, identified as I/2-C-1A to I/2-C-9A. The three remaining fighters were assigned to the “Jorge Chavez” Military Aviation School as advanced trainers, receiving the serials E/I-C-4A, E/I-C-7A and E/I-C-11A.

On April 17, 1935, a four-aircraft detachment took off from Las Palmas bound to Teniente Coronel Ruiz, led by the unit chief Commander Ergasto Silva Guillén. After arriving in Chiclayo the detachment performed a number of familiarization flights over the area until April 21st, when they returned to Lima. With the Teniente Coronel Ruiz airbase’s infrastructure completed, the Peruvian Aviation Corps’ High Command ordered, on October 5, 1935, the deployment of the aerial units assigned to the First Aviation Squadron to their home base, therefore a formation composed by nine Caproni Ca.111 and nine Ca.114 fighters left Lima at 10:15 AM, arriving in Chiclayo four hours later.

The Ca.114 first operative loss took place on September 4, 1937, when 2nd Lt. Enrique Fuller took off from Las Palmas aboard Caproni E/I-C-7A to carry out a routine gunnery practice at the Lurín training ground. However, after 15 minutes of flight, the Mercurio engine lost power and Fuller was forced to perform an emergency landing at nearby farming field, crashing against some trees. As consequence of the rough landing, Fuller was severely injured and the aircraft sustained 60% damages which rendered it all but unusable. It was later recovered by personnel from the Caproni Peruana factory, which stripped it from all reusable part and stored it until late 1940, when the airplane was scrapped. Another loss took place on August 18, 1938, when Lt. Carlos Frias crashed on a farm field in the outskirts of Chiclayo aboard Caproni I/2-C-6A. Frias was severely injured on the crash, and the airframe was declared a total loss. Personnel from Teniente Coronel Ruiz airbase recovered all useful parts from the wreck and shortly after the High Command ordered the derelict airframe to be sent to the scrap yard. In order to keep the unit’s operations unaffected, the Navy and Aviation Ministry ordered the transfer of one of the Ca.114 present at Las Palmas to Teniente Coronel Ruiz as a replacement.

In June of 1939, the Ca.114 E/1-C-4A and E/1-C-11A from the Military Aviation School were sent to the National Aviation Factory in order to receive a major inspection and overhauling. This included some small modifications to their airframe, the most notorious being the replacement of the heavy escape collector ring with lighter individual exhaust stacks. Finally, as with the Ca.113, all aircraft left the factory sporting an overall aluminum paint finish. A month later, the turn came for the fighters from 2 EC to be sent to the factory.

The organizational changes introduced by the Navy and Aviation Ministry in June 1939 affected the composition of all the Peruvian Aviation Corps units. The Second Fighter Squadron was not the exception and it was disbanded and replaced by the newly activated XXI Fighter Squadron, fielding six Ca.114 as part of the 42 and 43 escadrilles, while the 41 operated six of the recently arrived North American NA-50 fighters. In the meantime, the four remaining Capronis were assigned to the V Escuadrón de Instrucción to provide training for new crews as well as to serve as reserve aircraft.

By the end of 1939 the Caproni factory in Las Palmas issued several sets of wooden propellers for use with the Ca.114 Mercurio engines. These were built as a request by the Peruvian Aviation Corps high command, in order to preserve the stocks of the metallic propellers for these aircraft, whose availability had become endangered due to the war in Europe.

The year 1940 lapsed without incidents for the Ca.114 fleet, and activities were mainly focused to combat training from Teniente Coronel Ruiz in Chiclayo, and adaptation flights out of Las Palmas. This situation changed during the first months of 1941, after the creation of the Northern Operations Theatre -TON- as a direct result of mounting border tensions with neighboring Ecuador. The XXI Fighter Squadron, as part of the First Air Group, was included in the cluster of military units that formed the TON, and was tasked with the responsibility of patrolling the Peruvian northwestern borders, deploying its aircraft from the Tumbes and Talara forward airfields. The large number of sorties performed during this period caused a natural increase of accident risk and on June 26, during a training sortie, Ca.114 identified with serial XXI-43-3, flown by 2nd Lt. Rolando Gervasi, hit the ground during low level maneuvers and was heavily damaged. Miraculously, Gervasi walked away with only minor injuries, returning to operations after a few weeks. The aircraft, in the meantime, was sent to the Caproni factory in Lima to be repaired.

On July 5, tensions between Perú and Ecuador turned into military actions, and units of the Peruvian Aviation Corps were deployed to the border in order to provide close air support for the ground forces. The XXI Fighter Squadron also took part in the action, deploying its aircraft to the Tumbes forward airfield, located close to the border. From there the Ca.114 from 42 escadrille performed escort sorties on behalf of the Fairey Fox IVs from the 72 Land Information Squadron, and provided protection for the Peruvian Army units stationed nearby, these aircraft also provided close air support for the TON Headquarters, established in Tumbes airfield. Meanwhile, the 43 Escadrille was deployed to Talara airfield with orders to provide cover for the Ca.310 from XI Bomber Squadron as well as to serve as reinforcement if required. It is worth noting that in order to increase the operability of both units equipped with Ca.114, the Peruvian Aviation Corps’ High Command ordered the assignment of two additional aircraft to each Escadrille, thus raising their nominal force from 3 to 5 aircraft each.

On July 23, Peruvian forces began the push into Ecuadorian territory, and units of the Peruvian Aviation Corps were the first to get into action. On that morning Capt. David Roca, 2nd Lt. José Winder and César Garcés took off from Tumbes aboard Capronis XXI-42-1, 42-2 and 42-4, for an escort mission on behalf of the Fairey Fox from 72 escadrille. After completing their task, the unit entered Ecuadorian territory looking for targets of opportunity and, outside Puerto Bolivar, they discovered and strafed a small Ecuadorian navy vessel, the BAE Atahualpa, with poor results due to the inadequate armament.

The cease of fire of July 31 brought all offensive operations to a halt –albeit momentaneously- but patrols over Peruvian strategic assets, as well as over occupied territory, continued on a regular basis. It wasn’t until October 2, 1941, with the signing of the Acta de Talara agreement, which paved the way for the Protocolo de Amistad y Límites de Rio de Janeiro signed between Perú and Ecuador in January of 1942, that the demilitarization of the border began and peace returned to the area. In the meantime, the weary Caproni biplanes were ordered to return to Teniente Coronel Ruiz but only for a short period, as most of them had reached the end of their operative life. After an evaluation of their operational status, the recently created Air Ministry ordered that the four airframes in better condition were to be assigned to the 28 EI at Las Palmas, while the remaining airframes were to be scrapped.

The signature of the mutual assistance agreement between the U.S. and the Peruvian Government in late 1941, permitted the arrival of new aircraft through the Lend-Lease program, allowing the Peruvian Aviation Corps the much-needed replacement of several obsolete types. This was the case of the Caproni Ca.114 fighters, which by the time were hopelessly outclassed. Shortly after, in September, the first of a total of 28 surplus Curtiss model 75A-8, acquired by the Peruvian government in May 1942, arrived in the country.

Meanwhile, at Las Palmas, the remaining Caproni biplanes were pressed into service as advanced trainers for the Military Aviation School cadets, although accidents and lack of spares for their engines began taking the toll on their numbers. Thus, on October 15, 1941, 4th year Cadet Enrique Rivero Hard crashed against the sea near the area known as “Lomo de Corvina“, aboard Ca.114 serial 28-4-7. This area had strong sea streams which made very hard the recovery efforts of the unfortunate pilot’s body, which was finally retrieved three days later. In May 14, 1943, another aircraft was lost during operations –albeit this time without casualties- when 4th year Cadet Luis Costa Alfaro was “expelled” from the Caproni serial 28-4-6 after his strap belt broke while he was performing a loop. A quick reaction saved Costa’s life, as he managed to open his Salvatore type parachute immediately, descending harmlessly to the ground while his aircraft smashed against a street in the San Isidro district, although without causing any major damage. These losses left only two biplanes in operation, and both of them were kept in service until late 1944 when lack of spare parts and tear and wear on their airframes forced the Air Ministry to withdrawn them from service, being scrapped shortly after.

As a curious closing anecdote,  the U.S. Air Attaché in Lima reported that, during mock up dogfights held between the Ca.114s and the Curtiss model 35A Hawk IIs, the result was that the Italian fighter beat the Hawk II invariably.