The Caproni AP-1 in Paraguayan Service 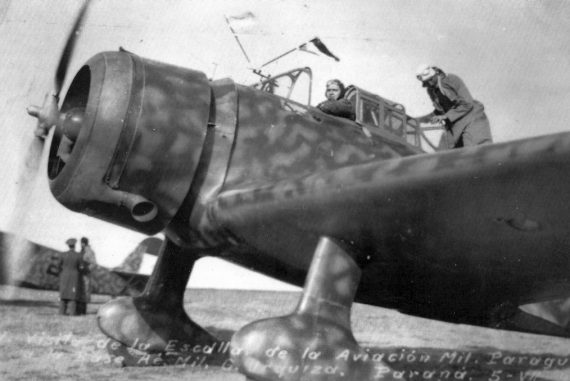 In 1936, during Col. Rafael Franco’s regime, a decision was made to purchase 60 new aircraft to re-equip the Paraguayan Air Arm. This move on the part of the Paraguayan government, made not too long after the cessation of the hostilities of the infamous Chaco War, came close to be consider a direct threat for the peace treaty with Bolivia, which hadn’t been signed yet. In any case, a total of 26 examples of the Caproni AP-1 were ordered from their Italian manufacturer and of these, 21 were of the land based version, destined for the Air Arm, while 5 were of the “Idro” aquatic version for the Naval Aviation.

Col. Franco’s government was overthrown in August of 1937, however, and the new president Dr. Félix Paiva, decided to reduce the number of aircraft ordered to a total of 20. For this reason, only 7 examples of the Caproni AP-1 were acquired for the Air Arm. Of the remaining 19 airplanes originally ordered by Paraguay, four were sold to El Salvador in 1938, and a fifth example was exported to that same country in order to replace one that had been destroyed in an accident shortly after its arrival. Ten more were sent to Spain in 1938, and the last four examples entered service with the Regia Aeronáutica.

The 7 Caproni AP-1s arrived in Paraguay during the last months of 1939, together with the other 13 aircraft purchased, all of them having been shipped by sea.

The Paraguayan AP-1 were equipped with a 9 cylinder radial Alfa 125 RC.35 air cooled engine of 580 HP, and were armed with two fixed forward firing 7.7 mm. SAFAT machine-guns and another example mounted on a flexible pintle, for the gunner. Additionally, a vertical bomb launcher with capacity for up to 500 kilograms of bombs was installed on the rear cockpit. All the Paraguayan AP-1s were painted with the standard Italian camouflage colors for the 1930’s, on top of which the Paraguayan insignias were applied.

After the re-organization of the Paraguayan Air Arm in 1939, the Caproni AP-1s were assigned to the “Segundo Escuadrón de Caza” (The Second Fighter Squadron), and received the following tail numbers: 2-1, 2-3, 2-5, 2-7, 2-9, 2-11 and 2-13, and were based at the Ñu-Guazú (a term in native guaraní meaning “Campo Grande” or “Big Field”) airbase, located near the capital of the country, Asunción.

It is worth mentioning that in 1937, a Paraguayan “aeronautical mission”, conformed by pilots and aviation from both the Air Arm and the Naval Aviation, went to Italy precisely to receive the training that was necessary for the operation of the new aircraft being acquired. This group was composed of 4 pilots and 7 technicians. Less than a year later, a second mission made of 5 pilots, arrived in Italy to receive training on the Fiat CR-32s and AP-1s operated by the 3º Stormo da Caccia at the Regia Aeronautica’s Mirafiori Airbase, in Torino.

Besides the Paraguayan personnel who trained in Italy, the newly acquired aircraft came to Paraguay accompanied by a Regia Aeronáutica officer, Capitano Virginio Teucci, as instructor and also by a mechanic, who helped the Paraguayan maintenance personnel with the assembly of the aircraft.

By mid-1939, all the aircraft had been assembled and the training began immediately with the Paraguayan instructors who already had returned from Italy, as well as with Captain Teucci. Surprisingly, by the end of that year, all the AP-1s were considered operational, thus becoming the very first assault and dive bombing aircraft operated by the Paraguayan Air Arm. According to some sources, the pilots really enjoyed flying them and no accidents or incidents were registered during 1940 and 1941.

In July of 1942, the Paraguayan government decided to send an “escuadrilla” (flight or Squadrille) of AP-1s to Argentina, to participate in that country’s Independence Day celebrations, under an invitation from the Argentinean government. Three AP-1s were readied this good-will mission, these being 2-1, 2-3 and 2-5, crewed by Major PAM Pablo Stagni as the Flight’s Commander, and pilots Captains PAM Luis Ugarriza, Gerónimo Centurión and Lucio Ayala; navigators were Captains PAM Abdón Álvarez Albert and MAM Agustín Pasmor.

The Caproni flew to Buenos Aires on July 5 of that year, making a technical stop at the Paraná Air base, where the Paraguayan aircrews fraternized with their Argentinean counterparts. The same day, the flight was continued to the Argentinean capital, arriving after sunset at the El Palomar Air Base, with the exception of aircraft 2-5, which due to mechanical difficulties, made an unscheduled landing on an unprepared surface field in San Fernando (Province of Buenos Aires), sustaining severe damages. The crew, Capt. PAM Gerónimo Centurión (pilot) and Captain MAM Agustín Pasmor (navigator), were lightly injured. Here it is worth mentioning that this aircraft was disassembled and transported to the Fabrica Militar de Aviones (Military Aircraft Factory) at Córdoba, where it was completely refurbished. This airplane returned to active service in Paraguay by the end of 1942. The other two AP-1s, as well as all the Argentinean aircraft, were unable to participate in the air parade due to marginal weather and low visibility.

In 1943, the 7 AP-1s were still in active service, and more pilots were being trained on them. By mid-1944, there were 5 AP-1s airworthy, while the other two were undergoing repairs. By then, the AP-1 pilots practiced dive bombing using the vast and uninhabited regions of the Paraguayan Chaco.

The Second World War, regrettably, impeded the delivery of spare parts for not only the AP-1s but also for the other Italian-built aircraft that the Paraguayan Air Arm operated, and this inevitably started a cannibalization process in order to keep the rest of the fleet in flight. In any case, beginning in 1942, the Paraguayan Air Arm began receiving a good number of training aircraft from the United States, under the Lend-Lease Program; aircraft included were the PT-19, BT-13 y AT-6 and these replaced the Italian built aircraft. By the end of 1946, there were only four flyable AP-1s, the remainder three examples having been cannibalized.

1947 was a tragic year for Paraguay. A revolution divided the Air Arm (and all the army and navy) in two factions. When the conflict started, there were only three AP-1s in service, and these remained with the Government Air Arm. Since the majority of AP-1 pilots sided with the Revolutionary Air Arm, the Capronis saw limited use during the five month long conflict. Several missions for reconnaissance and machine-gun fire on enemy positions. When the rebel’s attack on the capital was imminent, all Government Air Arm flyable aircraft were moved to the city of Pilar, in the southern part of the country. Since the Government’s pilots were few, it was decided to leave behind the AP-1s in the hangars at the Ñu-Guazú Air Base, but in order not to destroy them, vital components were removed from the engines. When the rebels took the base, they found out that they couldn’t operate the Capronis. In the end, the attempt to capture the city of Asuncion failed, and the rebels were defeated.

After the 1947 revolution, three AP-1 were put back in service, and saw limited use until 1949, when they were definitely retired. Sadly, not a single example of these beautiful airplanes was preserved for posterity.

The AP-1s had all the top wing surfaces, fuselage and wheel’s pants painted in dark green, with khaki colored spots. Underside surfaces were painted in light gray. The frontal cowling ring was bronze in color. Initially, the Paraguayan roundels were painted only on the wings undersides, but later they were also applied to the upper surfaces. They had a Paraguayan tri-color flag on the rudder, and a yellow star on the white stripe of said flag. The serial number was painted in black, with large squared numbers in the fuselage’s posterior area.