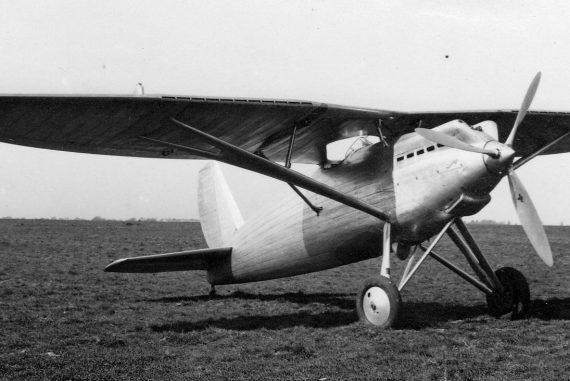 FRANCE’S CHASSE 1 (C1 — Fighter 1) Specification of 1930 called for a state-of-the-art single-seat fighter for the Armée de l’Air (AdA — French Air Force), to be powered by a 650 h.p. engine and capable of a minimum top speed of 350 km/h (217 m.p.h.) at 4,000m (13,120ft) and an operational service ceiling of 9,000m (29,500ft). Accordingly, the Nieuport-Astra company (to become the Nieuport-Delage Co in the 1930s, in honour of Gustave Delage, the company’s chief designer and company manager during the First World War), began studies for a new light fighter in compliance with those parameters. In 1931 the result, the Nieuport-Delage 120-series, was submitted for consideration, along with 27 other designs offered by several French manufacturers.

The NiD 120C 1 base design was a parasol monoplane of all-metal construction. The fuselage comprised a metal structure covered with duralumin panels, with the wing, supported by a Y-type strut, incorporating a “cut-out” above the cockpit to allow the pilot to raise the seat so that his head protruded just above the wing. Another distinctive feature of the type was the engine-cooling system, which incorporated radiators built into the wing, with the air sucked in through slots in the leading edges and expelled through the trailing edges after circulation. Other innovative features of the NiD 120-series included the installation of a CO2 fire-suppression system, a complete radio transmitter/receiver suite and a pneumatic brake system for the mainwheels of the fixed undercarriage.

Two prototypes were produced: the NiD-121C.1, powered by a 650 h.p. liquid-cooled V12 Lorraine 12Hars Pétrel engine, and the NiD-122C.1, powered by the similar but more reliable Hispano-Suiza 12Xbrs V12 engine of the same power. The latter was the first of the two prototypes to fly, on July 23, 1932, in the hands of test pilot Joseph Sadi-Lecointe. The NiD-121C.1 made its maiden flight on November 25, 1932. Unfortunately, the NiD-122C.1 prototype was destroyed in an accident on April 13, 1933. The aircraft was performing a low-level pass in front of members of the French Parliament when it lost a wing section due to severe vibration, crashing and killing its pilot. Testing, however, continued with the second NiD-122C.1 prototype, which flew for the first time in July 1933. The results of the tests of the prototypes were promising, with the NiD-121C.1 reaching an impressive top speed of 367 km/h (228 m.p.h.). The AdA, however, selected the Dewoitine D.500 as the winner of the competition, discarding the Nieuport-Delage design due to its weak undercarriage, an alleged vulnerability of the radiator to combat damage and poor stability at large angles of attack. In order to compensate the company for the prototype development expenses, however, the French government authorized Nieuport -Delage to offer the type for the export market.

In the meantime, the Cuerpo de Aviación del Perú (Peruvian Aviation Corps – CAP), embarked in a re-equipment and modernization process aimed to counter the numerical advantage obtained in the air by the Aviación Militar de Colombia during the so-called “Putumayo Conflict”, a non-declared war between the two countries for the control of a large land section between the Caquetá and the Putumayo rivers on the Amazon forest. Colombia had achieved this thanks to a large –and early – re-equipment process (launched shortly after the beginning of the hostilities with Perú) while, in the meantime, Peruvian government – which had remained confident of a quick victory over the back then under-armed Colombians – tried to counter the Colombian response, but lack of political cohesion led to precious weeks to be wasted in political debates before the Congress could authorize the external indebtedness of the country.

Once funds became available, the Peruvian government sent Purchasing Commissions overseas, one being dispatched to France after the Peruvian Ministerio de Guerra (MG — War Ministry) had been contacted by Paul Dietrich, representative of the French Societé Generale Aéronautique, a consortium incorporating manufacturers including Hanriot, CAMS, Nieuport-Delage, Lorraine and Amiot. Once in France, the commission visited the Potez, Nieuport-Delage, Morane-Saulnier and Hanriot factories where several aircraft types were evaluated.

In early March of 1933, during their visit to the Nieuport Centre d’Essais de Matériels Aériens at Vélizy, Villacoublay, the Peruvian delegation saw the 121C.1 prototype which was offered as a fast, modern and powerful fighter capable of out-run and out-climb the Curtiss Model 35A Hawk II, Colombia main fighter at that time. With few options available in the market –and despite the machine was still in the development status, the CAP representatives reached a pre-agreement and committed to buy a batch of 10 machines on the premise that the following modifications were to be implemented:

In order to not leave the Peruvian skies undefended while the lengthy modifications and production tooling process for the NiD 121 ordered by the CAP took place, Nieuport offered to ship 3 Nieuport-Delage NiD-626 fighters –an export version of the NiD-62C.1 powered by a 500hp Lorraine-Petrel 12Hdr engine. Although initially favorable to the proposal, the CAP eventually declined the offer after a report from its Technical Committee ruled the model as unsuitable for use in the harsh environments of the Amazon forest due to its wooden construction.

After numerous delays, the series NiD 121C.1 was finally shown to Peruvian officers in September of 1933. This model, however, was powered by a 550hp Lorraine-Petrel 12Hars engine in lieu of the proposed 720 hp Lorraine 12Hdrs, as this more powerful engine was still in the development stage. Nearly a year later, on July 18 of 1934, the NiD123C.1, floatplane version fitted with the Hdrs engine, was finally evaluated by the CAP commission, which found its characteristics unsatisfactory, discarding its purchase. Despite this, the original order for ten NiD-121C.1 fighter was confirmed and since the purchase of the trio of NiD-626 fell through, the CAP opted to increase the order for NiD-121C.1 to a total of 12 units. After nearly two years from the original order, Nieuport finally began delivery of the fighters in December of 1934, completing the deliveries it in February of 1935.

The arrival of these fighters took place after the signature -in June of 1934- of a definitive peace treaty between Colombia and Perú, which meant that the planned deployment of these fighters to the Amazon Rivers was put on hold. Nevertheless, a five aircraft escadrille was activated at Ancón as part of the III Escuadrón de Aviación (Third Aviation Squadron). This unit, called 4to Escuadrón Mixto, began crew conversion on the type in December of 1934 and it was during this period that the Nieuport-Delage fighter recorded its first accident in Peruvian territory. On May 9, 1935, as the pilot of a NiD-121C.1 identified with serial 4-C-5 was taxiing to the hangars at Ancón from the contiguous airfield after completing a training sortie when its landing gear entered into soft sand causing the aircraft to flip over its nose, causing moderate damage to its vertical surfaces, as well as to the propeller and engine. The airframe was carried to Las Palmas were repairs on its structure were completed early in 1937. A few months later, the four Ancón-based NiD-121C11 were transferred to Las Palmas airbase in Lima where they joined other aircraft under the newly activated 2 Escuadrón de Caza (Second Fighter Squadron, 2 EC), a fighter unit assigned to the II Escuadrón de Aviación, being assigned with the correlative CAP serials II/2-C-1C to II/2-C-12C.

The Peruvian pilots appreciated the NiD-121C.1’s speed and climb rate, although novice pilots found its controls to be unforgiving, especially during landing. On July 9, 1936, NiD-121C.1 serial II/2-C-3C was heavily damaged after it tipped over during landing. The CAP lost a NiD-121C.1 on October 21, 1936, when 2nd Lt Silva Boggiano crashed in II/2-C-7C during a training flight. Performing a mock dogfight against a Caproni Ca.114 biplane over the base, Boggiano executed a tight turn, causing his aircraft to stall and crash into one of the hangars when his wingtip hit the roof of the building. Boggiano was killed and a pair of mechanics working on a Vought O2U-1E Corsair in the hangar were seriously injured.

In January 1937 the nine surviving NiD-121C.1s of 2 EC were deployed to Vitor in Arequipa Province in southern Peru, to the newly inaugurated Mayor Guillermo Protzel del Castillo airbase, in accordance with the Air Force Strategic Distribution Plan put in place the previous year. Construction of this airbase, home of the Second Air Region, began in May 1936 and, along with the forward airfields in Juliaca and Tacna, was part of the defensive plan for the south of the country. Given the short range of the Nieuport-Delages, they were first sent to Ancón, where they were fitted with floats before flying south towards Pisco, Marcona and Mollendo on the Peruvian Pacific coast. Once at Mollendo harbour the machines were placed on flatbeds and sent by railroad to Arequipa, where they were reassembled and flown to the nearby airbase at Vitor.

In 1936 a series of nationwide labour strikes in France hit the country’s aviation industry, leading to the nationalisation of some 80 percent of the nation’s aircraft manufacturers, which were combined into seven Société Nationales (National Companies). However, it took months for French industry to recover from the forced halt on production, and in the meantime, irreparable damage was inflicted on the supply of spares and customer support for aircraft supplied to foreign air forces, including the Potez 390s and NiD-121C.1s of the CAP . By the end of 1937 only a handful of NiD-121C.1s were still in airworthy condition, and CAP requests to the recently created Office Français d’Exportation de Matériel Aéronautique (OFEMA— French Aeronautical Materiel Export Office) for the provision of critical spares received no meaningful or useful reply.

Towards the end of 1938 the lack of spares for the NiD-121C.1s’ Pétrel engines — caused by logistical problems in France as a result of the absorption of Nieuport-Delage into the Société Nationale des Constructions Aéronautiques de l’Ouest (SNCAO) — became a critical factor in the CAP High Command’s decision to retire the NiD-121C.1 from service. By early 1939 all had been grounded, forcing the Peruvian Comandancia General de Aeronáutica (GCA — Aeronautics High Command) to withdraw officially the NiD-121C.1 from service, selling the surviving airframes as scrap in October 1940.