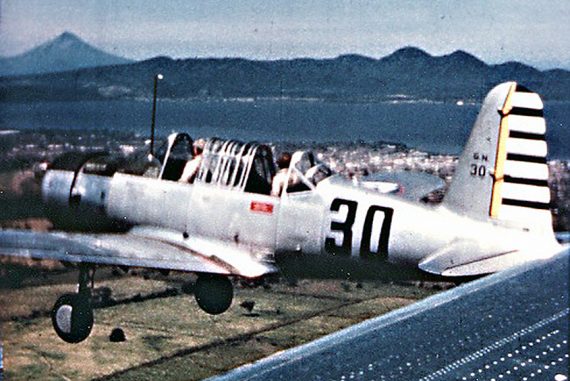 Every so often, fate hands the historian additional facts with which to craft a more complete account of an event or activity. Often, these come unexpectedly and from unusual sources. Such is the case of a Spanish-language history of the Nicaraguan Air Force, dated November 1953, which adds considerable data to the summary published by this student of the subject in the Air-Britain Central American and Caribbean Air Forces of 1993 (can it be 25 years ago?!)

The translated text of this document is presented here, hopefully for comment and expansion by the LAAHS membership, with a few comments, in bold face, in the original, rather self-serving language of the document. Of particular interest to LAAHS members will be some of the names, which will hopefully enable us to expand on the rather hazy understanding of this Central American air force.

It is otherwise presented here just as it was found in USAF Air Intelligence Information Report IR-109-53 dated 17 November 1953.

In 1934, Nicaragua was one of the few civilized countries of the world which did not have an air force. Previous governments had lacked sufficient foresight to realize that aviation would hold such an important place in the future development of Nicaragua. The then Chief Director of the National Guard, Division General A. Somoza, was aware of this deficiency and worked with all his interest and enthusiasm toward the formation of an air force.

As a first step, Nicaraguan nationals already engaged in flying, but for foreign countries, were called home to form the first group of Nicaraguan Air Force Officers. These men were unanimous in sharing the enthusiasm of General Somoza for the formation of a Nicaraguan Air Force. Fortunately, the foundation of the new Air Force was charged, not only to recruit pilots, but also qualified aircraft maintenance personnel. Men were selected to become aircraft mechanics, and after instruction in the United States, were eager to begin enlarging and developing the Nicaraguan Air Force.

Upon orders of General Somoza, the National Military School of Aviation was founded in 1934. This school began instruction with a Ryan high-wing monoplane and using the services of Captain Aguilar, a Honduran national, as flying instructor. [The aircraft involved here is a mystery. According to a U.S. War Department General Staff G-2 (Intelligence) Report dated 15 May 1928, the Honduran Ministry of War ordered a Ryan monoplane from Mahoney Aircraft Corp. for $20,000. Noted Ryan historian John Underwood has stated that “I’ve searched my records and can find no Ryan B-1 earmarked for or delivered to Honduras, which includes used aircraft up to 1936. The only B-1 unaccounted for is c/n 43, which doesn’t show up in any records and is a great puzzler. Could this be the aircraft which first served Nicaragua?] The foundation of this school stimulated interest in flying in Nicaragua and the following first students were enrolled: Captain Lisandro Delgadillo; Federico Cabrera; Federico Davidson Blanco; Lieutenant Modesto Valle; Sergeant Ezequiel Bojorges and civilian Enrique Calderón.

During the same year, General Somoza obtained a GN-1, single-engine, cabin-type Waco for the air force and obtained the services of Messrs. Robert Eagle and Bill Kinsley and 2nd Lieutenant Ramon Leal Díaz, a Mexican serving with the National Guard, for pilot instruction. [This is the Waco Model C purchased from Francisco Rodriguez M. for $2,750 on 21 April 1934. This was almost certainly a UEC with a Jacobs engine and was later sold to Aerovías Nacionales de Costa Rica. It was wrecked at Puerto Cabezas around 1938 and was rebuilt in Costa Rica apparently]. In 1935, the Chief Director of the Nicaraguan Air Force acquired aircraft GN-2 and GN-3. [These are mystery aircraft. One of them was almost certainly one of the Boeing Model 40s, and it would appear that the other was one of the three Fords]. A short time thereafter, Colonel Pedro Ivanoff, a Russian and Captain Luis R. Paris, a Costa Rican, were employed by the Air Force as instructors. The next aircraft acquired by the FAN was a Taylor-type plane.

In 1937, the Chief Director, General Somoza, bought a tri-motored Ford airplane, a GN-5, from a Colombian company, and two others of the same model from Pan American Airways. Civilian pilots Penny Roger (U.S.) and César Avente, in addition to a Paraguayan Lieutenant, hero of Chaco, were employed as instructor pilots. [These appear to almost certainly be nomes de guerre, and I have no candidates]. With this equipment the LANIC company, a government-owned airline, was formed and operated on the Atlantic coast for some time before being sold to TACA.

During the same year, Lt. Modesto Valle and Lt. Carlos E. Monterrey began aviation courses at the Roosevelt School in Minneola, Long Island, U.S. The Nicaraguan Air Force was reinforced with the acquisition of aircraft GN-7, GN-8 and 12, all military Wacos; the GN-10, a cabin Waco; and the GN-11, a Ryan.

Soon thereafter, the GN-9, a Grumman [In fact, a Canadian Car & Foundry G-23], and the GN-14, a Fleet, were purchased in Canada and flown to Nicaragua by Nicaraguan pilots. [If true, this is news]. On the return trip they were joined by Mr. René Blandón, who had been studying aviation in the U.S. and was ready to begin service in the Nicaraguan Air Force.

In May 1938, Lt. Modesto Valle, Lt. Carlos E. Monterrey and Mr. Armengol Martínez completed their aviation studies in the U.S. and returned to the Nicaraguan Air Force. On 24 August 1938, the FAN suffered its first fatal accident when Captain Charles Baldwin crashed during a routine flight maneuver piloting a GN-11.

In spite of its youth, the Nicaraguan Air Force now contained many qualified aviation personnel. This was proved in 1940 when an aviation mechanic left the air force to work for Pan American Airways in Brownsville, Texas. Due primarily to the efforts of General Somoza, the FAN continued to grow and progress for the remainder of this period.

Under the guidance of then Captain Guillermo Rivas Cuadra, the Nicaraguan Air Force grew to the same level of strength and efficiency as other Central American Air Forces in the opinion of foreign military experts who visited Nicaragua. In recognition of his tireless efforts and great capabilities as an organizer, Captain Rivas Cuadra was promoted to Major, then Colonel, and at present holds the high diplomatic office of Nicaraguan Ambassador to the Dominican Republic. Through the efforts of His Excellency, President of the Republic, General A. Somoza, two B-24 bombers and one A-20 attack bomber, were acquired for the Air Force from the U.S. Expert North American pilots were obtained to check out Nicaraguan Air Force pilots. In addition, the U.S. offered courses in pilot training and aviation mechanics to the FAN. Since then the great majority of mechanics of the Nicaraguan Air Force have attended a Latin American School at Albrook AFB, Canal Zone.

The Military School of Aviation, under the direction of Colonel Espinoza Z., present Ambassador to El Salvador, recruiter studious young Nicaraguans who were anxious to serve their country. Almost all the graduates of the first class of this school are now serving in either the Nicaraguan Air Force or in civil aviation.

On 8 May 1948, Colonel Guillermo Rivas Cuadra was relieved of his position as Commander by Colonel Carlos E. Monterrey, and Colonel Rafael Espinoza A. was relieved  as Director of the Military School of Aviation by Major Juan Garcia Zaldana. Following the lead of their predecessors, these officers maintained the steady progress and development of the FAN. Among other things they improved the organization of the Nicaraguan Air Force and obtained two P-38 figthters, as well as other small aircraft for basic and advanced flying training. Under the administration of Colonel Monterrey, a second class of cadets was graduated and strengthened the ranks of the pilots in the FAN.

On 3 June 1950, by command of General A. Somoza, Major Carlos Vanegas, who had obtained his pilot training in the U.S. and at this time was serving as a pilot for LANICA, was appointed Commander of the FAN, relieving Colonel Monterrey, who was sent to fill a diplomatic post in New York. On that same date, then Captain Roger Bermudez relieved Major Juan Garcia Zaldaña as Executive Officer of the FAN. Carlos Vanegas, who was promoted to the rank of Colonel on 1 May 1951, has continued the efforts of his predecessors to promote the growth and welfare of the Air Force. Both the Military School of Aviation and the Administrative Section of the FAN were reorganized. The Air Force Surgeon attended a course in Air Medicine at Randolph Field, Texas and three officers took additional pilot training in the U.S. Two Cadets from the Military School of Aviation completed their pilot training in Venezuela. At present, the Military School of Aviation, in addition to flying training, teaches classes in geography, languages, mathematics, and basic military instruction. Courses are also offered in aerodynamics, meteorology, aircraft engines and radio communications.

The FAN, which was created to defend the country from outside aggression and to preserve internal security, has also served the country during such times of emergency as the floods in the region of the rivers Coco, Prinzapolka, Grande, etc. by cooperating with the Red Cross in the rescue of the injured and by flying in clothing, medicine and food. During epidemics, the FAN has evacuated citizens from afflicted areas to places where medical assistance was available. The FAN has also helped to avert locust invasions. This was done with aircraft equipped for aerial spraying of insecticides, saving thousands of acres of crop land. In addition, the FAN, on occasion, has assisted its neighboring countries during times of disaster. The FAN carried aid across the Andes to Ecuador, where the people had suffered a major earthquake, and assisted El Salvador and Guatemala during times of earthquake and flood.

The FAN, since its foundation, has suffered the loss of the following members: