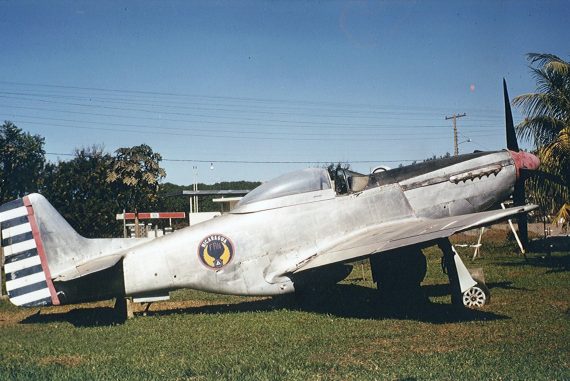 In 1985, Aerofax had the courage to publish a small monograph co-authored with John Dienst, entitled North American F-51 Mustangs in Latin American Air Force Service (ISBN 0-942548-33-7) which was an honest effort to pull together what was felt, at the time, to be the best understanding of these classic aircraft, as they saw service in Latin America.

Looking back on it, the effort was probably premature, and had this aero-enthusiast been more patient, and awaited the wonders of the internet (which could still not be conceived as we know it today, at time of writing) a much more accurate and comprehensive record could probably have been assembled (the original manuscript was actually typed on a standard, non-electric typewriter!). On the other hand, Jay Miller, owner and publisher of Aerofax at the time, is owed a debt of gratitude for publishing what was, as of 1984-85, the first English-language monograph dedicated entirely to a specific aircraft type operated in Latin America. For that, eternal gratitude is owed, because even though the monograph was a soft-bound tome, measuring but 64 pages, it was a financial gamble with a completely unknown potential market.

Inevitably, over the span of the intervening 34 years, additional bits and pieces of the total picture started to emerge although on balance, the bulk of the original findings have held up remarkably well – with one notable exception.

That exception surrounds the operation of F-51 Mustangs by the Somoza-dominated government of Nicaragua. Despite never-ending inquiries of varying degree of persistence, to this day, we are left with a very incomplete understanding of precisely what happened with regard to the Nicaraguan Mustang experience. In part, this can be attributed to a combination of apparent political intrigue, natural catastrophe and an exceptionally poor paper trail. Of these factors, your scribe has been particularly puzzled by the nearly complete absence of normal U.S. intelligence reportage on the subject when, at nearly the same juncture, intelligence reports for sister republics still extant in public repositories can be said to range from good to excellent.

This article is offered to the Latin American Aviation Historical Society membership, and its remarkably well-informed external readership, with the profound hope that we might jointly manage to put some of the questions still pending to rest – although some may never be satisfactorily answered.

We have confirmed and reliable reports from at least three sources that the Government of Nicaragua purchased 26 ex-Flygvapnet (Royal Swedish Air Force) in a deal which had been in the works as early as July 1954, and which included a 500 hour spares package (per aircraft), 12 spare V-1650 engines, zero timed, 100 spare M-2 .50cal. machine guns, 600 extra barrels for same, some two million rounds of .50 caliber ammunition and “…the temporary use of advisory mechanical personnel,” all via the agency of Henry Wallenberg of Stockholm for something in the order of $650,000. The identities of these, both their original USAAF serials and their Fv serials, have been confirmed. These aircraft did in fact arrive in Nicaragua, crated, January 16, 1955. According to a US intelligence document dated January 1st, “…President Somoza has stated that he desires to keep only five or ten of the aircraft and that he will sell the remainder.” Herein may be found the first of the mysteries surrounding the Nicaraguan F-51Ds:

We also know that Nicaragua acquired, via a straight commercial sale, two TF-51D two-seaters, paid for in 1957, but actually delivered circa February 20, 1958. Both of these aircraft are accounted for, one being sold to Trans-Florida in July 1959 and the other sold to the U.S. broker who purchased the bulk of the other survivors in September 1963.

Finally, we know that Nicaragua acquired seven ex-USAF F-51Ds in late May 1958, and all of these have been identified.

Thus, not counting the single aircraft that was traded to Guatemala, it is safe to say that, between January 1955 and May 1958, Nicaragua actually purchased a total of 34 Mustangs. One of the very few Air Order of Battle documents to emerge relative to this story, oddly enough, was a British Air Attaché report, dated May 12, 1959 (by which time all acquisitions should have been complete) which reflected a total of 29 F-51s in the Nicaraguan inventory including two dual-control aircraft, with a footnote which stated that less than 50% of the aircraft were in regular use and, additionally, that although all of the aircraft were fitted with bomb racks, “…not all have guns.” This British report is difficult to reconcile, in light of known Nicaraguan F-51 accidents – with the caveat that not all of them may have been write-offs (although given that those shown below involved loss of life in each case, it is difficult to see how they could have been resurrected). Known FAN F-51 losses are as follows:

Since all of these incidents occurred after the single large batch of 26 ex-Swedish aircraft arrived, and all but two after the arrival of the ex-US TF-51s and F-51s, and since we know with a good degree of confidence which aircraft were sold to MACO Sales Financial Corporation to be returned to the US in September 1963, totaling 21 aircraft, there must be some losses that are not accounted for.

The only other accurate intelligence document to emerge from the FAN F-51 era was that of July 1959, which read as follows: “In July 1959, an uneconomically repairable TF-51 was disposed of on a trade basis for serviceable F-51 parts with a Florida firm [this was almost certainly 44-84658, which went to Trans-Florida]. The parts were valued at $10,000 and the deal included rocket rails. The TF-51 was air-freighted to Florida via PAA. FAN inventory as of 31 August 1959 stood at 14 F-51s bought in Sweden in 1955 in good condition, one TF-51 bought from the USAF in 1957 in good condition and seven F-51Ds bought from the USAF in 1958 in good condition.” A footnote to this report stated further that “…one TF-51 and six F-51s were deleted from the inventory during the report period. One of the F-51s crashed during the ”emergency” during this period.”

What We Don’t Know

Around August 14, 1958, one Enruve García, a registered agent of the Dominican Republic, arrived in Managua with a letter of credit for $139,500 plus another $50,000 for ocean freight, expiring on August 18th (but extended to October 18th) to purchase from the FAN six to 12 F-51s, plus spares, for the government of Indonesia. The U.S. State Department was asked, in essence, if it had any objections to such a sale. It is unclear from existing records whether or not this sale was ever consummated.

There also remains the question of the Guardia Nacional serial numbers issued to the FAN F-51 fleet. The lowest number thus far confirmed was GN76, while the highest, one of the ex-USAF F-51Ds acquired in May 1958, was GN122. If these serials were in fact issued consecutively, they would amount to 47 aircraft, rather than the 34 known to have been acquired and, it is assumed, erected and in receipt of FAN markings. There is, consequently, something wrong with the numbers. It is know, for instance, that Nicaragua received 15 North American T-6G Texans commencing in November 1955, and that at least one of these received serial GN111, so this might help balance the ledger. However, in order to arrive at something coherent, it first requires that we examine the GN numbers for P-51s that are known. These include GN76 (there is some evidence that this serial may have been used twice), GN79, GN80, GN83, GN85, GN87, GN90, GN91, GN93, GN94, GN96, GN98 (the first of the ex-USAF TF-51Ds), GN117 to GN122 (the seven ex-USAF F-51Ds acquired in May 1958). GN15 has also been frequently quoted, but is believed to be in error, and possibly mistaken for GN95. There are others which have been reported that are difficult to reconcile, include GN100 and GN126. If GN76 was the lowest ex-Swedish aircraft received and which received a number, then logic would dictate that the highest ex-Swedish number should be not higher than GN101. However, since we know that GN98 was the first of the two ex-USAF TF-51s, and it was not delivered until February 20, 1958, there is clearly either something wrong with the numbers….or the GN re-issued numbers, something that is it rarely known to have done. Of the above serials, the following are actually quoted as being amongst those sold to MACO in September 1963: GN76, GN80, GN85, GN87, GN93, GN94, GN96 (or 98?), GN117, GN118, GN119, GN120, GN121 and GN122.

All of this is aggravated by the fact that very, very few photographs of any of the ex-Swedish FAN F-51Ds have emerged and, as a direct consequence, it has proven very difficult to verify serials. Clearly, a better understanding of these would go far towards resolving these outstanding questions.