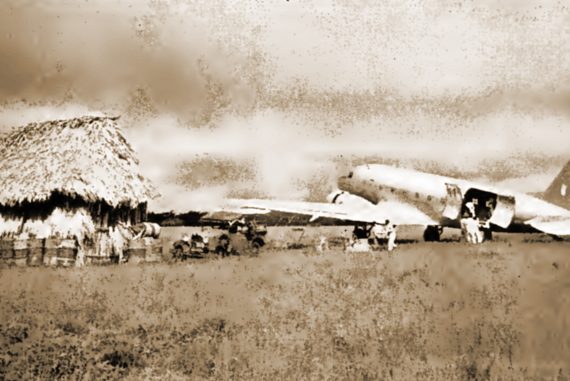 This short article about the Guatemalan airline Aviateca, was published on the “Bulletin of the Pan American Union” of July 1947. Besides a couple of minor edits regarding the correct names of some of the places mentioned, the piece is reproduced here in its original form.

Nowhere in the world has aviation so vitally affected the every-day life of the people as it has in Latin America. Here industry and agriculture, language and customs, yes, even the existence of entire communities depend to a large extent on air transportation.

If you remember what your geography book said about Central and South America, you can appreciate the reasons for this unique situation. Isolated by natural barriers of mountain or jungle, many of these countries never experienced the normal development of canal boat, railroad, or highway transport. Instead, people who traveled only by muleback and dugout canoe are now enjoying the speed and comfort of modern airplanes. Away from the larger cities, for instance, it isn’t at all unusual to find veteran air travelers who have never seen a locomotive or taken a ride in an automobile.

Some economists say that these countries will actually develop faster without the burden of costly and obsolescent ground transportation systems. Whether this is true or not, it is certainly evident that the airplane has a role here entirely different from its role in the United States.

At the present time there are between 60 and 70 air transport companies serving Latin America. While a few large international lines receive most of the publicity and profits, the majority of these organizations go unnoticed in their unglamorous job of bringing daily necessities to hundreds of isolated villages. And if you have ever wondered what happens to airplanes considered too old for service in the United States, you will find them here, stripped of their plush seats and soundproofing perhaps, but still performing yeoman service.

Just to get an idea of how these small domestic lines operate, the author recently spent a day with Aviateca, Guatemala’s pioneer airline. This company, started with one small airplane back in 1929, now serves the entire country with two Douglas DC-3’s, two DC-2’s, one Ford Tri-Motor, and one single engined Norseman. All schedules are fluid, that is, planes are flown to any point where cargo piles up. Luxury items are carried from Guatemala City to any point in the interior for seven cents per pound while staple goods are first shipped to Puerto Barrios by rail, then flown from there at four cents per pound. This system simplifies bookkeeping, of course, and encourages commercial distributors to cover the entire country. Passengers are carried when there is room and, if they are lucky, bucket seats may be installed.

A typical work-day begins at 6:00 in the morning. Mechanics give the plane a final check while gas tanks are being filled and cargo goes aboard. Last minute weather reports are received as the three passengers climb in. Our DC-3, a veteran of the European invasion, is loaded with 2 and a half tons of Klim powdered milk, Pablum, Campbell’s tomato soup, Hinds’ Honey and Almond Cream, DDT powder, tires, wagon wheels, and a girl’s bicycle. We take off from Guatemala City’s beautiful La Aurora airport and in ten minutes are over the jungle-blanketed mountains with no signs of civilization visible. The American pilot, Johnny Matthews, assures us that an emergency landing field is never more than 20 minutes away. “Of course, on some small fields,” he adds, “it might be impossible to fly the ship out again.”

In less than an hour, we circle low over the tiny village of La Libertad. There is no radio here and the pilot has to wait until someone comes out to chase the cattle from the landing strip. After an easy landing on the natural grassy savannah, the big plane rolls to a stop in front of the thatched hut which serves as administration building. Supplies destined for the town are piled on the edge of the runway and 2000 pounds of corn, the area’s chief source of income, are loaded aboard.

The next stop is Flores, with a population of about 2100. This leg of the flight takes only eight minutes, so we fly just over the tree tops. Suddenly the brackish water of Lake Petén Itzá comes into view and we see the town huddled on a tiny island. A short stretch of sandy beach on the mainland serves as a landing strip; all cargo and passengers have to be paddled across to the town in canoes. Flores citizens spend most of their time gathering and preparing chicle for their gum-chewing cousins to the north, and so important has this industry become that even the limestone for a new hospital was brought in by air. Of course, the chicle goes out by air since it would take two weeks and cost twice as much to ship it overland. Our load of corn is left here and we take off empty for Cobán, 100 miles to the south.

Large billowy clouds are snagged among the Santa Cruz mountain peaks, so Matthews pulls the ship up to 12,000 feet. At this altitude it’s easy to forget that you’re flying in the tropics. About the time you are wishing loudly for an overcoat, the descent is started and everyone swallows lustily to relieve the change in pressure on his ears.

The field at Cobán is approached through a valley with hills towering on both sides. Some of the little farms appear to be standing on end as they slide by the window. Suddenly the pilot makes a 90 degree turn to the left and we drop into a postage stamp field. Brakes are jammed on as soon as the wheels touch. Most of the townspeople are lined up along the fence in their colorful costumes. Twenty-three of them are going north to gather chicle during the summer; each is provided with an assortment of bedding, clothing, food, chickens, pigs, and dogs. The men, of course, carry machetes as their only tool for jungle work. On takeoff, the wheels are lifted quickly and we barely scrape over the trees at the end of the runway.

In a half-hour we are back at Flores for refueling. Passengers and their bevy of livestock get out for a breather, because the cabin soon becomes unbearable in the hot sun. Some of the corn is taken aboard again for points further north.

Soon after takeoff, we are thrilled by the sight of an enormous stone temple jutting from the expanse of jungle. This mysterious structure marks the deserted ruins of Tikal, an ancient metropolis of the Mayan empire. In his book “The Ancient Maya“, S. G. Morley estimates that Tikal once had a population of 200,000 or more. As we circle overhead, it appears that the ruins cover at least several hundred acres. While it is difficult to understand how an advanced civilization could exist in such a wilderness, the outlines of a once vast lake system visible from the air suggest that this may have been a rich agricultural district centuries ago.

We are still discussing this possibility when Matthews has to devote his entire attention to finding the tiny strip at Dos Lagunas. The field here is so narrow and the trees are so high along its edge that it is practically invisible from the air. To eliminate the possibility of missing the field entirely, a radio marker had to be installed. To add to the fun, the landing strip is strictly one-way. When it was constructed, the ground crew spent several days chopping down trees before it was discovered that a large hill was directly in line with the runway. It was too late to start over again, so the field is still used from one end only, regardless of wind direction!

State-side pilots who are used to landing a DC-3 at 70 to 80 miles per hour would also be amazed at the way Aviateca’s pilots set one down at 50-60 without pancaking. This technique is essential on such short runways.

As usual, most of Dos Lagunas’ citizens come running out to the field when the plane lands. It is their only contact with the outside world and the occasion for the community’s chief social function. Our passengers disembark here and, surprisingly enough, none have gotten ill in spite of a very bumpy ride. In a few minutes we are airborne again, headed for the Caribbean city of Puerto Barrios.

Aside from Guatemala City, Puerto Barrios has the only considerable airport in the country. Its long concrete runway was constructed during the war as part of the Inter-American defense plan. The town is the terminus of Guatemala’s only railroad and Aviateca maintains a warehouse here. While heavy tractor parts and drums of Diesel fuel are being tied down in the airplane, we enjoy a good hearty lunch prepared by the company cook.

In the afternoon we take a long northward jump to the agricultural colony of Poptún, located in a remote section near the Mexican border. This project was begun recently on an experimental basis by the Guatemalan government, and if it is successful, other colonies will be established nearby. While the jungle here has been displaced by patches of scrubby pine, the land is still relatively poor. Nevertheless, more than two hundred families are working to put in diversified crops.

A few miles from Poptún is an Indian village where the ancient Mayan tongue is still spoken. These people sit for hours watching the jeeps, tractors, and dump trucks brought in by the noisy metal bird.

Two sun-burned surveyors, an expectant mother, and a priest make up the passenger list for the trip back to Guatemala City. All of us catch a couple of hours’ sleep sprawled out on blankets covering the metal floor. As we climb stiffly out of the plane back at La Aurora airport, a new four-engined Clipper taxies up to discharge its well-groomed passengers. We envy the friendly adiós of the attractive stewardess, but we wonder if these passengers can truthfully say that they have seen Guatemala.