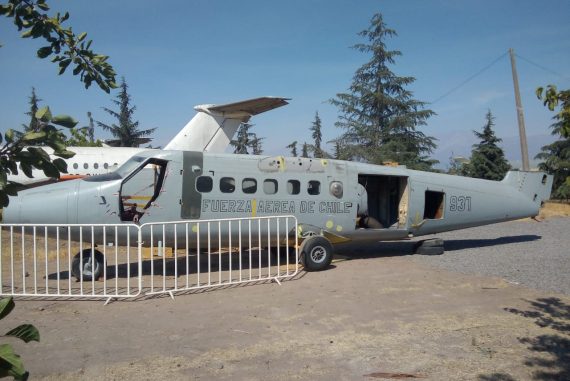 On December 17th, 2019, the National Aeronautics and Space Museum of Chile received a great new addition: A de Havilland Canada DHC-6-100 Twin Otter, painted in the fantasy serial number “931.” The airplane arrived disassembled on the top of a flat truck and was placed immediately in open storage, as can be attested by the accompanying images. Operationally this Twin Otter, manufacturer’s serial number 7, was assigned the Chilean Air Force serial “935” in October 1966, when she entered service. At the time, she was the first aircraft of such type ever received by any air force of the World.

FACh 935 served faithfully with the Chilean air arm until 1998, when she sustained substantial damage during an accident at Cerro Moreno AFB, near Antofagasta. Then, she was moved to El Tepual AFB, in Puerto Montt (home of the Grupo de Aviación No.5 and operator of the type since 1966), with the aim of getting her back to service, but after a thorough evaluation it was determined that the airframe was beyond economical repair. By October 2008 she was noticed as gate guardian at El Tepual AFB, with the long nose of a Series 300 airplane installed, and a light gray camouflage scheme with the serial “931” painted on.

On May 12, 2019, after several years in the open, “931” was spotted on a truck heading to El Bosque AFB, home of ENAER, where she was placed in long-term storage. However, after nearly seven months, the airplane was transferred to the Museum where she will remain stored awaiting restoration. On such regard, there are great expectations from the local aviation community to see her restored with her original short nose -typical of the early Series 100 Twin Otters- and the original color scheme in which she arrived in Chile back in 1966 (white top fuselage, blue cheat-line and light gray undersides.)

The following are images taken on the day that FACh 935 arrived in the Museum.