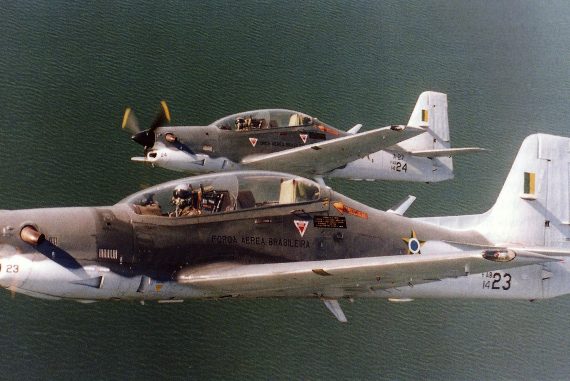 The first time I had the chance to see the Embraer EMB-312 Tucano in action was during an impressive aerobatic display that the Brazilian Air Force’s Esquadrilha de Fumaça performed at La Aurora Airport, in Guatemala City, sometime in 1985. As far as I can recall, that air show was part of a publicity tour for the aircraft, which had included other Central American Countries. For me, it was love at first sight. The airplane seemed faster and way more agile than the Pilatus PC-7s that the Guatemalan Air Force operated at the time and, above all, it had certain sexiness that hadn’t been present in combat aircraft since the introduction of the North American P-51D Mustang during WWII. Many Guatemalan military pilots also fell in love with the Tucano on that day too and hoped that our government would pursuit the purchase of at least six of them. Unfortunately, and despite Embraer’s best efforts, such acquisition never materialized.

Around that time, the Honduran Air Force had already received the first six from a total of 12 aircraft that the air arm had acquired, thus becoming the very first foreign operator of the Tucano. The Honduran purchase opened the door for additional orders from other countries in Latin America, so the EMB-312 -or T-27 as it is officially known- began spreading its wings over Venezuela, Argentina, Colombia, Perú and Paraguay. The success story of the Tucano didn’t end there though, since during the following years Embraer received orders from several nations across the Atlantic, including Angola, Egypt, Iran, Iraq, Kuwait, Mauritania and -incredibly- from the United Kingdom and France!

Without any doubt, the story of this successful Brazilian airplane needed to be told in great detail, since only fragmentary information had been available along the years. Fortunately, the journalist João Paulo Zeitoun Moralez accepted the challenge and has authored what can be considered the definitive account about the Tucano. With 256 pages in U.S. letter size (11 X 8.3 inches), the book covers the humble origins of the EMB-312 as a replacement of the Cessna T-37C in the Brazilian Air Force, its evolution to meet that air arm’s requirements, as well as its operational history. Best of all is that João Paulo took care of including anecdotic episodes never before published, among them various combat deployments to the border with Colombia, where the Brazilian Tucanos flew missions against the FARC guerrillas.

The book also explores the Tucano’s service with foreign air arms, including the Colombian Air Force that flew the Tucanos in innumerable counter-insurgency operations, and the Peruvian Air Force that deployed them during the Cenepa War against Ecuador. In the chapters dedicated to the Honduran and Venezuelan Air Force, João Paulo tells us how those air arms used the Tucano very effectively for intercepting (and even shooting-down) drug-running aircraft. Then, the author details the adoption of the type by the Royal Air Force and the Armée de l’Air Française, as well its service with African, Middle East and South East Asia nations. Last, but not least, the book has a chapter about U.S. private firms who operate the Tucano in special missions on behalf of that country’s government. The final chapter covers the successor of the Tucano, the EMB-314 Super Tucano, and serves as an introduction for an upcoming volume that will cover -also in detail- the history of that aircraft and that I’ll be reviewing too. (You can find this review here.)

In the tradition of Harpia Publishing, the book has been produced with excellent quality and is very elegant. Additionally, it comes with no less than 130 color photographs and 80 very detailed color profiles that will make scale modelers really happy. On the other hand, João Paulo didn’t forget about us, the serial number junkies, and has included 17 tables listing the individual story of every EMB-312 / T-27 ever produced. There is also, a section with color drawings of the unit badges that have operated the Tucano across the world, which will delight those crazies who love that kind of stuff.

As I’m sure that you are already salivating and can’t hardly wait to get your hands on a copy of this excellent book, please visit Harpia Publishing website and order it directly from them or visit Casemate Publishers’ website if you are in the U.S., Canada or Latin America. The book is also available from Amazon, but I have been asked not to tell you that. 😉